Age in sports can be a tricky thing. Sometimes it can be construed as having experience, being a true veteran, or defying Father Time. There are other times when age can be interpreted as old, past your prime, or a shell of himself.

The real answer is probably somewhere in between. Two things can be true at the same time. Someone can defy Father Time but also be past their prime. You can lose a step and tail off physically but by having a sharp mind, being highly prepared, and a skilled veteran you can outwit the more athletic opposition.

With advancements in training, modern medicine and recovery methods age in sports isn’t as easy to decipher as it once was. Athletes are now playing well into their thirties and even forties in some cases at a high level. As we gear up for the upcoming 2020 season all of those clichés and factors have been taken into account as I rank the 10 best quarterbacks over the age of 30.

1. Russell Wilson: If not for Lamar Jackson’s historic season I believe Russ would be the reigning MVP. He carried a team beat up on the offensive line and at running back late in the season all the way to a playoff win on the road. You could never count the Seahawks out of any game. Seattle was 10-2 in the regular season in games decided by eight points or fewer, and they won their 11th one-score game against the Eagles in the Wild Card round. At only 31 years old I’m sure we have many more years of Russ and his heroics. He truly lives up to his nickname of DangeRuss.

2. Aaron Rodgers: Word on the street is Aaron is on the decline. He’s 36, so it is possible but I think another year in Matt LaFleur’s system will silence talks of the 2 time MVP showing his age. The last three seasons haven’t gone as planned for Rodgers and the Packers, but he’s still a threat to win MVP and complete a spectacular pass at any given moment.

3. Matt Ryan: Matt’s career has been up and down since the immaculate 28-3 comeback by the Patriots. He was named MVP in 2016 but then saw his touchdowns nearly cut in half from 38 to 20 in 2017. The 12-year pro replicated his MVP season statistically in 2018 but the team went 7-9. Then in 2019 his interceptions doubled to 14 and again the Falcons missed the playoffs. Even with all that being said, there aren’t to many guys you would take over Matty Ice to have under center.

4. Tom Brady: At age 42 Tom doesn’t possess the arm of his younger years, but what he brings mentally, leadership wise and experience wise is invaluable. He didn’t have much to work with in his last season with the Patriots but in Tampa having Godwin, Evans, and his buddy Gronk, he could be in line for an impressive season.

5. Drew Brees: Like Tom Brady Brees’ arm might not be what it once was, but tell that to the NFL record book. With seemingly every throw another record goes down. It’s fair to mention however over the last 2 seasons down the stretch Drew hasn’t looked the same and in some respect cost the Saints 2 playoff games. Enjoy Drew this year, because it could be his last.

6. Kirk Cousins: Kirk is easily the most disrespected QB in the NFL by pundits. The “win a big game” narrative hangs over his head tirelessly but any unbiased critic would tell you that Cousins played at an elite level this past season. As a Viking he’s completed nearly 70% of his passes, thrown for 7,900 yards to the tune of 56 TD’s and 16 INT’s. Yes, Kirk has his flaws as all QB’s do but that is high level production, and he belongs right there in that 2nd tier of quarterbacks.

7. Matthew Stafford: Stafford in my opinion is the sole reason the Lions remain relevant and relatively competitive in games. Stafford played like a top-five quarterback early on before the back injury became too much, and he had to be shut down for the season. Once he was out the Lions didn’t win a single game. At 32, I would hope he can somehow find his way out of Detroit to a better situation because a guy this talented deserves better.

8. Philip Rivers: Rivers has had more than a few inconsistent and turnover filled years recently. But one thing about Philip, when he has a running game and a clean pocket, he still has a cannon and can still make all the throws. He won’t have the receiver weaponry with the Colts that he had with the Bolts but with a pretty solid offensive line, running backs and defense he could be in line for a redeem season.

9. Ryan Tannehill: The 2019 Comeback Player of the Year took the Tennessee Titans on a joyride they won’t soon forget. In 10 regular season starts he paved the way for the Titans’ playoff push going 7-3 amassing a 69% completion percentage, 2600 passing yards, 22 passing TD, 4 rushing TD and only 5 interceptions. Was last season fools gold or is this magic carpet ride just beginning?

10. Ben Roethlisberger: A 38-year-old passer coming off major elbow surgery doesn’t sound very appealing to me. Big Ben played 1 full game last year and won’t have much time to prepare and get ready for this season. He’s never been known as a workout warrior but could the year off be just what the doctor ordered? Will he be motivated and rejuvenated enough to perform at a high level and get his team back to playoffs? I wouldn’t bet on it but I can’t wait to see Big Ben take on the challenge. 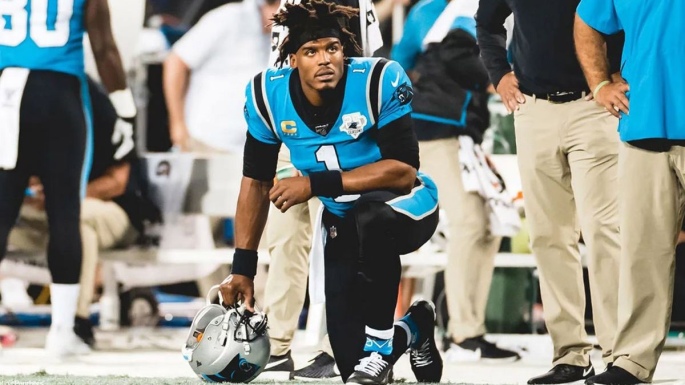 The world of sports can change so quickly. One minute you’re up and the next you’re out of the league. It happened in basketball to Carmelo Anthony and now it’s happened in the NFL to Cam Newton. The persona, the perceived ego, the media attention have all combined and created a storm that shows no signs of clearing up right away. As Cam awaits, here are the best landing spots for him.

Cam Newton is no Russell Wilson, but he’s as close to a fill in you’ll find, if Seattle had to bring someone in. Pete Carroll embraces guys being themselves, Seattle fans are very open, and the offense has potential.

The Raiders signed Marcus Mariota to be Carr’s backup. If Derek Carr is injured or traded the Raiders can’t expect to win games with Mariota. Cam would give you a higher upside on the field and off the field media coverage moving to a new city.

Injuries hit the Falcons every year but its never hit Matt Ryan. If something were to happen and with Quinn on the hot seat, the Falcons could opt for the 2 for 1 special of selling tickets and trying to win by bringing in the GA native.

After seeing what Mason Rudolph and Duck Hodges did last year, if Big Ben gets injured again Pittsburgh should opt to upgrade the position since they didn’t use the draft to fill the need. Tomlin is the kind of coach who can handle the media attention and locker room presence of Cam, I mean Tomlin had Antonio Brown for years.